Indonesian Day is a yearly event that exhibits Indonesian culture to an international audience. Indonesian students and expats will provide an array of dishes, pieces of music, and dances to showcase our beautiful country. This year’s event would be a little bit different since Corona measures have to be taken into account. But don’t you worry, as an Indonesian proverb says “Mengambil kesempatan dalam kesempitan”, which roughly translates to taking advantage in tough or difficult situations, we will be making this year’s Indonesian day more interesting and accessible than ever!

That is why we are proud to present Indonesian Day 2021. In order to make it more accessible, we will hold the event online where we strive to show more content virtually through the means of social media and our own website. With that in mind, we also want you to be a part of our exciting celebration by joining as performers in the upcoming exhibition of Indonesian dance and music.

You can still enjoy Indonesian dishes during Indonesian Day by following the easy recipes on our Instagram page, where we will post simple recipes that you can follow and a couple of snacks you can enjoy to replace boring popcorns. Other than recipes, you can anticipate cultural facts about Indonesia and also some glimpses of behind the scenes of our events.

You can enjoy some of our contents available in PPI Groningen’s youtube and Indonesian Day 2021 Instagram. We have various entertainments for you to enjoy, from podcasts, cooking recipes, fashion tips and so many more. 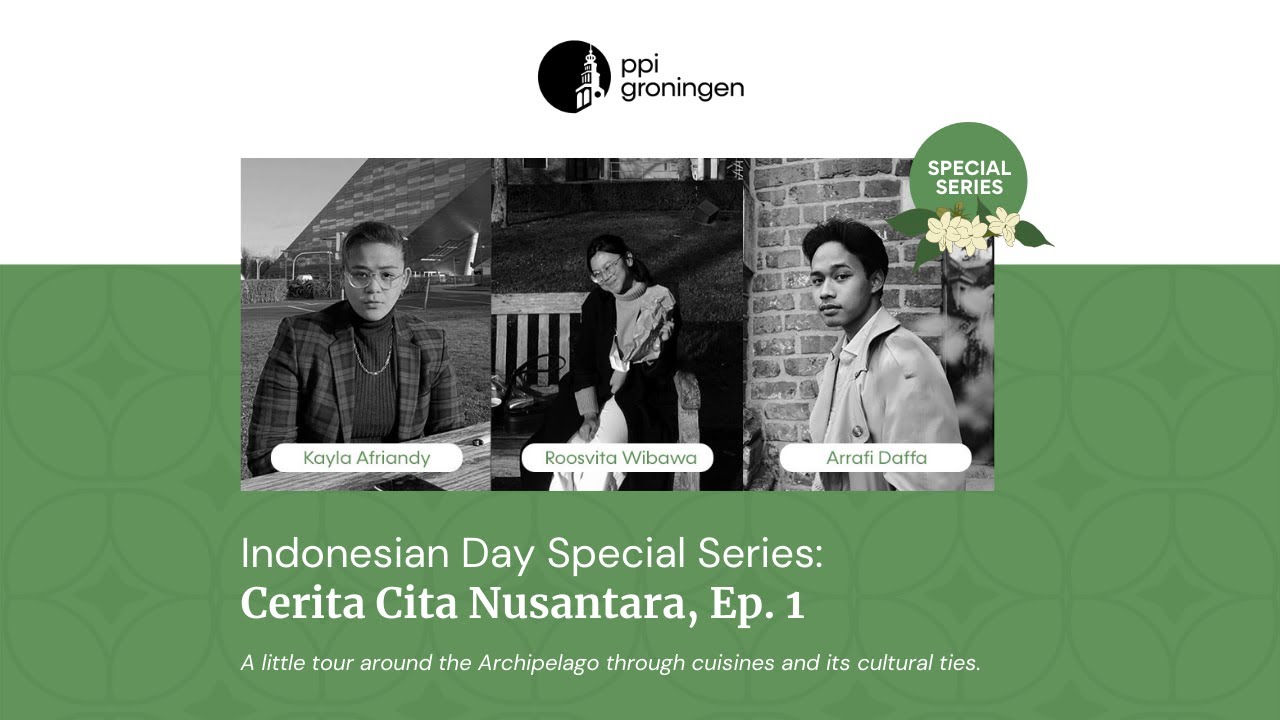 On this Indonesian Day 2021, we are taking you on an adventure! No, It is not an adventure of 20.000 leagues under the sea, or to the center of the earth, instead we are taking you on an adventure around Indonesia in a day! Also, don’t worry adventurers,  we will have some company to show you around the archipelago. So get your backpacks ready, your food supplies stocked, and with the help of our friends, we are going to explore around the many islands of Indonesia.

Starting off in Sumatera, the westernmost island in Indonesia which  offers a rich and diverse culture derived from more than hundreds of ethnic groups located in the region. One of the most well-known is Tari saman, a cultural dance from the northernmost part of Sumatera, called Aceh. This amazing dance incorporates both coordination and stamina, where a few to hundreds of dancers sit in one place whilst the upper body and arms do much of the work. The island is also the birthplace of rendang, one of the world’s tastiest dishes.

Next, we will hop on to Java, the most densely populated island in Indonesia. Do you know that 60% of Indonesians live in Java? It is a busy island filled with people from all over the world, and yet it still manages to preserve its rich cultural heritage. It is also the island where the capital city Jakarta is located, a bustling metropolitan with more than 10 million inhabitants.

Let’s get a change of scenery shall we? Kalimantan is the right place to refresh your eyes. In this gigantic island with lush forest and nature preserves, it would be perfect for a nice change of scenery from the bustling island of Java. The island is where a diverse flora and fauna can be found such as the Orangutan and black Orchids as an example. All in all, its immense size made the island to become one of the largest islands in the world.

Of course, we cannot miss Sulawesi, the island situated precisely besides Kalimantan. Also known as Celebes, this island is as interesting as the other islands and it has its own distinct shape, mimicking the letter ‘K’. the island is where the most beautiful coral reef concentration is located, precisely in the northern part of the island, near the city of Manado. The island is also the place of numerous ethnic groups such as Buginese, Toraja,  Makarese and many more.

Last but certainly not the least, is our last stop Papua, which is the easternmost part of Indonesia. Situated in the Western part of the New Guinea Island, Papua is the place to see more beautiful nature. From the beaches to the mountains, Papua has the best of both worlds. Raja Ampat, a regency located in the crown of Papua offers an exquisite marine beauty with hilly  archipelagos standing in midst of the crystal clear blue waters. Under the water, exist a plethora of coral reefs where people can enjoy snorkeling activities. Going from the crown to the body, a mountain range with the most peak is at ‘Puncak Jaya’. With an elevation of 4,884 meters, its peak represents the highest point of Indonesia.

Exciting isn’t it? Each island has their own unique characteristics and specialty of their own personality, offering a variety of  experiences and atmosphere. While these islands might differ significantly to each other, yet they all synergize under one which makes up the amazing and diverse Indonesia.

The Ties Between Indonesian Arts and Culture with Nationalism

Adventurers, you must have gained a lot of knowledge about Indonesia from traveling with us for the past couple of months right? Indonesia has a lot of beautiful natural scenery and diverse culture to explore, but Indonesia is unique not only because of its nature and resources but also because of its people. Do you…

Indonesian Day 2014: The Colours of Diversity

Anticipate more from us and stay updated on our most recent content by following our social media!
Go to Top